Are You Losing Sleep Over Your Cat?

Do you ever find yourself woken up during the night by a furry paw-tap on your head, or worse, a shrill miaow either right in your face our outside your bedroom door? If so, you’re amongst a not-so privileged group of owners who are being kept awake at night by their cat.

A cat’s natural body rhythms make it more active at dawn and dusk and during the hours of darkness, more often than not, the very time when we humans are tucked up in bed. Whilst some cats adjust to a sleep/wake cycle that more closely matches our own, others don’t and it’s the owners of these nocturnal nuisances that find themselves walking around like zombies during the day!

This was the case for Julia who approached me for help regarding her cat Dodger’s dodgy night time habits. Dodger, a three year old Burmese, had always been a vocal cat who liked to prowl, especially during the evening and overnight. However, during the previous eighteen months this behaviour had gradually increased to the point where the disruption to Julia’s sleep was becoming so severe that it had started to negatively affect her relationship with her once beloved cat. 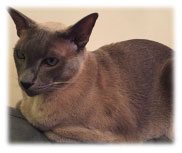 From Dodger’s perspective, as an indoor cat it is likely that he was frustrated at his inability to exercise when his body was at its most receptive, and the harsh repetitive vocalization was a manifestation of this frustration.

In this case Julia was unwittingly the maker of her own misfortune, because by responding either consistently or intermittently to Dodger’s demands for attention, she was inadvertently rewarding the very behaviour she was seeking to stop, thereby giving him carte blanche to repeat it, night after night…

Before we look at how we addressed this from a behavioural perspective, it’s important to always make sure that any harsh night time vocalization doesn’t have a physical cause. This is particularly relevant when we consider our ‘senior’ cats where such behaviour could be the result of an age related impairment of their cognitive function. You should therefore always discuss any changes in your cat’s behaviour with your vet first.

When I visited Dodger he had already been given a clean bill of health so I was able to go ahead and make recommendations to try and resolve the behaviour.

Firstly it was important to change Dodger’s body rhythm by altering his routine. We did this by dividing his daily food ration into four small meals. For his penultimate meal I asked Julia to reduce the amount of food given to him to ensure he was hungry for his final meal. This was to be given to him as late as possible and would consist of a food he particularly enjoyed.

The second strategy involved excluding Dodger from Julia’s bedroom at night and providing him with an alternative, attractive bedtime environment downstairs. In this area he was to be provided with all his essential resources available within sight. The central focus was to be a heated pad placed on the sofa, covered with Julia’s dressing gown. Other stimulating resources such as toys, cardboard boxes and a multi-level scratching post were also to be made available in the new area to keep Dodger amused during the night, should he feel particularly active.

I ask Julia was to apply a new night time routine. At 10pm when she went to bed she was to give Dodger his final meal of the day in his night time area. She would switch on the heated pad, switch off the lights and close the door.

The third and final change was for Julia to consistently ignore any excessive vocalisation she heard at night. I advised her that the behaviour could get worse before it stopped as Dodger became frustrated that his calling was no longer linked to human contact, but there should be sufficient interest in his night time area to satisfy him. Any reinforcement of the behaviour by human contact (or even banging on the floor or shouting), especially if it was provided intermittently, would make the problem extremely difficult to resolve. I also suggested that Julia might like to buy some earplugs!

In the morning when Julia was ready, she was to open the door to the night time area, greet and feed Dodger then turn off the heated pad.

I was happy to hear from Julia only a few days later reporting that the changes were already having a positive effect. I held my breath, hoping that this would continue and after three weeks received another update. Dodger was no longer vocalising at night, was relaxed, calm and a generally more chilled cat. Julia had her old Dodger back along with a full quota of sleep each night!

This cat looks almost terrified of his stuffed toys!Instagram | @mochikittyfrog ...

Friends can come in all shapes and sizes!Credit | boredpanda.com ...

Looks like he's not keen on moving seat!Credit | boredpanda.com ...